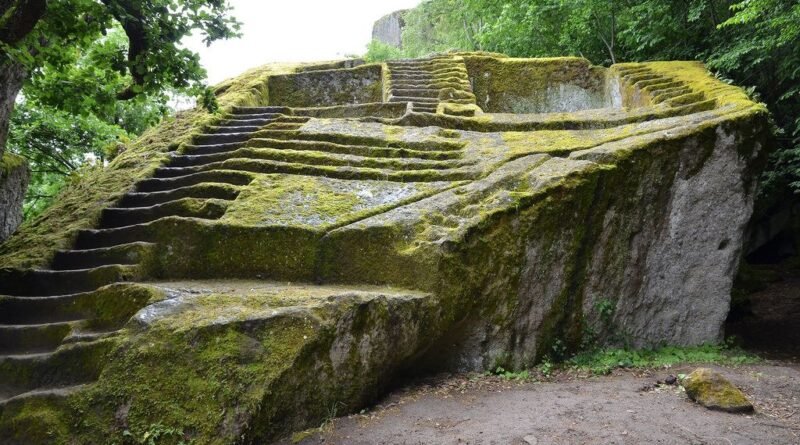 Many famous Staircases in the Woods have a story. There are many famous staircases, including the Spanish Steps in Rome, Santa Fe’s Loretto Staircase, and steps leading to nowhere at the Winchester Mansion.

These iconic structures are well-known, but there is another type of unusual staircase that has been making waves on the Internet. Many people have reported isolated staircases in national parks and woods around the world. These stories have also led to some strange and bizarre tales about people who climbed mysterious stairs in the woods or national parks.

These strange stairs can be found in forests miles away from any settlement. They can vary in design, style, age, and condition.

They are often difficult to identify and can be hard to find the reason they are there. It’s almost as if the person who built some of these structures simply disappeared.

If you love to explore ghost stories then you should also read this: 17 Indiana Haunted Places

A 2000-foot-long abandoned staircase climbs Phnom Kulen mountain in Cambodia’s Siem Reap Province. Experts believe that the structure is known as Pleu Cere and dates back to the ninth or 13th centuries.

Experts aren’t certain who or why it was built. It may have been used as a way to get to the ancient city of Mahendraparvata, which is now buried under the jungle.

Quarries were also found on Phnom Kulen Mountain for the construction of Angkor temples. Did King Suryavarman II build the staircase for workers to acquire building supplies for Angkor Wat in the 12th century?

Bomarzo is a small town in Viterbo, Lazio, Italy. Bomarzo was once part of Etruria, a larger region that the mysterious Etruscans controlled from approximately 700 BCE to around 400 BCE.

They built a strange structure from volcanic rock in Bomarzo’s thickly wooded valley. It is now known as the Etruscan Pyramid in Bomarzo. The front wall is decorated with steep steps, numerous platforms, rectangular cubicles, and channels that run at odd angles.

Experts believe it was constructed around the 7th Century BCE to serve as a sacrificial altar. This was most likely the largest European rock altar.

3. Stairs to Nowhere Virginia: Staircase in the Woods

A “stairway to nowhere” might seem like a nightmare. We found an amazing staircase to nowhere in a West Virginia State Park. It takes you up through a fairytale forest and gives you magical views of our little slice of heaven.

This creepy staircase leads to nowhere and it is just one of many hidden in the woods on the 2 mile Patterson Trail at Carnifex Ferry Battlefield State Park near Summersville.

4. The Ranger’s Creepy Stairs in the Woods

The creepy steps of the forest ranger are here. A forest ranger witnessed something strangely frightening. He was trying to help a young man climb up the tree. But something cut his hand. The thing that cut his hand is not known, No one knows what it was (it’s still a mystery). And the worst part? His hand is still missing.

5. Madame Sherri’s Stairs in The Woods

A set of wooden stairs has been a landmark in Chesterfield, New Hampshire. The staircase is not really a mystery but it does elicit curiosity.

There is a story to it. Madame Antoinette Sherri (Parisian music hall singer) built her “castle” to be a summer home in Chesterfield during the 1920s. It was not a castle-like structure, but it had the charm of a French chateau, with a stone staircase that led to the second level.

Madame Sherri’s parties were the most royal and scandalous of all.

6. Stairs in the woods in Germany without a destination

7.The Staircase of Missing Time – Philippines – Stairs in the Woods

Torkik was a ranger. Torkik is on a task to find missing persons in the jungles. Because the jungles and forests of the area are dense and difficult to navigate, this makes the task a little difficult.

Torkik claimed that two staircases led deep into the forest during one of his routine patrols. Torkik decided that he would climb the stairs out of curiosity and to have a better view of the forest.

The first staircase was made of stone and had decorative carvings. The second staircase was more similar to something someone would have made with the natural stones found in the area. Torkik didn’t see any signs of backpackers missing, but he did spot a vicious stray dog. To avoid the dog, he rushed up the stairs further.

He was unsuccessful and finally returned to civilization. Torkik received a news report that was both disappointing and confusing at the same moment.

Now ranger reaches the station. People at the station told him that you are terminated from your job. He thought he was only out for a few hours. But, the truth, as he told it, was amazing. Torkik was on patrol for five long years!

When an officer from the CDC, who was a specialist in researching the infectious disease, learned about the vanishing staircase in the woods. He settled his camp near the mysterious staircase in the forest, where he stayed the next day and night.
The next morning, he woke up, the staircase was not there, rather, there was a black burnt mark at that place. He found that staircase 50 meters away from the same spot and were baffled about how it moved there.
As a result, he did research. The wood of the staircase was harder and much stronger than any wood available in the world. It was even impossible to scratch it. The staircases moved from one place to another every other evening, leaving the burnt spot, and in a week or so it vanished. Researchers say that the staircases are emitting a frequency, but they are still unsure of the receivers.

9. Ghostly Staircase in Sweden: Staircases in the Woods

Another paranormal story is about another staircase. It describes the paranormal experience in which one of the friends felt the presence of a third person. The tap that he received on his shoulder was cold and chilly.

Few More Photos of Strange Staircases in The Woods

6 Smallest City in The World By Area & Population 16 Strange Trees Around the World |Weird and Unique Trees